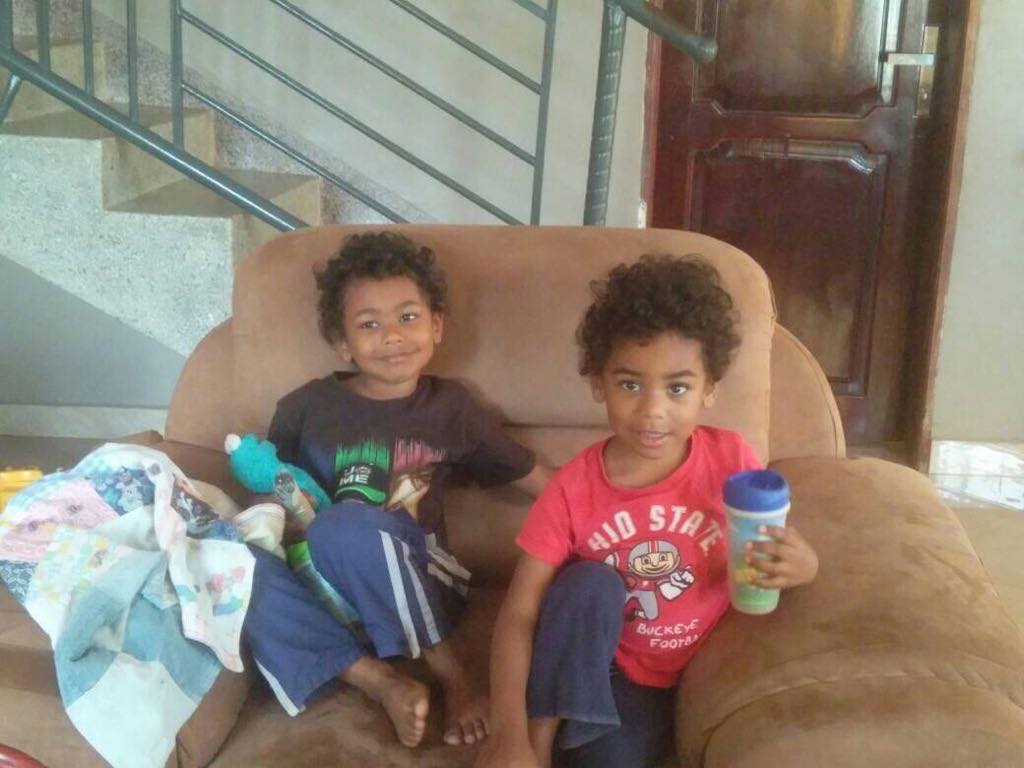 The other day found me crying in my kitchen over $22. Actually, more like sobbing hysterically. Over $22. Those who know me well can attest that I am a frugal mama, and others can attest to the fact that I tend to be emotional, but even those people would tell you that me sobbing over $22 sounds extreme. Let me take you there.

My kids, Omar, 5 years old, and Reihan 3 years old, had terrible colds. The kind of icky, drippy, achy, shaky, low grade fever, blow your nose 1000 times a day terrible colds. Except the 3 year old doesn’t really know how to blow his nose, so he’s constantly explosively sneezing. If you don’t catch it in time, he rubs it on the couch or anywhere else he finds convenient. And the 5 year old is so miserable he just wants to sit on my lap, but it's 90 degrees with no A/C at our house. It’s the rainy season, and when the rain comes, the power goes off for hours at a time. This eliminates the possibility of electronic distractions, cold juice, hot tea, and the ability to warm up food, not that mom is cooking today.

We had been treating the boys with over-the-counter cold medication, cough suppressant at night, and dosing them in between with honey and lemon. Omar takes everything willingly; with Reihan some things can be hidden in the juice cup (thanks, mom), but when they are too strongly flavored they must be forced down his throat with a syringe. Alligator wrestling is the only occupation that might prepare you for this task. When you wrestle an alligator, however, a main objective is to stay away from the teeth to get his mouth open and force something between them. I strip him naked. He starts screaming when he sees the syringe. As I try to get him pinned, he cries, thrashes, kicks, and claws before I even manage to get the syringe in his mouth. He bites down and spits as the liquid begins to fill his mouth. I get half the meds in him. I attempt to repeat with the second syringe, praying that two syringes somehow approximate a full 5 mL dose, but knowing full well that at least 3 mL are covering MY face and hair. I throw him in the shower - cold if the power is out - to get the stickiness out of his hair and off his body. He screams when the water is cold. We repeat every 4-6 hours.

Then there is the coughing. Coughing all night long so no one, especially me, gets any sleep. On the fourth night, as I begin to feel my own immune system fail me, the boys’ coughing all night turns into coughing so hard they vomit. Multiple times. Have I told you we don’t have a washing machine?

After the vomiting night, we decide the boys need antibiotic, steroids, and stronger cough suppressant. Sadhat agrees to bring them home in the evening after work. The boys and I slog through the day, taking turns dozing on the couches. They manage to keep bread and juice down; I pray the power doesn’t go out and take away Disney Jr. Sadhat brings the meds around 8 pm. I force them down the children, a total of 20 mL of meds, plus the honey and lemon. I get them showered, covered in vaporub and pajama-clad tucked into bed.

I decide to shower, then I meander back into the kitchen laughing at the passing thought that I might do the dishes. The medicine bottles, dosing cups, and syringes are scattered on the counter so I decide to straighten up. The last thing I need is a swarm of sugar ants coating my countertops in the morning. I sort out all the medicine bottles to match their boxes and their instructional leaflets. I make space in the refrigerator door for the FIVE bottles in their boxes, and just as I pick up the last, the antibiotic, the bottom of the box opens and the antibiotic crashes to the floor and smashes into a million shards of glass and sticky mess, all over the floor, the bottom of the fridge, under the fridge, the cabinets, and my legs and feet.

I broke a bottle of antibiotics that my kids desperately needed. I myself was sick and completely overexhausted, overextended, and had to clean up an icky, sticky, glassy mess. Enough to reduce many mamas to tears, I expect. But let me explain what $22 means in Uganda.

Most “things,” that is to say, foodstuffs, household, medical, electronic, and even luxury goods are available in Uganda. The problem is that they cost at least the same amount of money as they would in the US or Europe, plus the import cost, plus the profit margin. For those folks who are being paid in US Dollars, Euros or Pound Sterling, typically at the same rates as they would domestically, the cost of living in Uganda can be low. For those of us earning a living in Uganda in Ugandan Shillings, it can be difficult to afford anything beyond the basics.

My husband Sadhat is a Lecturer at Makerere University. That is equivalent to an Assistant Professor at an US university. His job puts us in the top 20% of the income bracket for the country, for which we are very grateful. I won’t bore you with all the numbers, but it is safe to say that we earn approximately 25-30% of what an equivalent salary would be in the US. Thus our budget needs to be about 25% of what I would have spent in the US. Again, many, many of the products sold in Uganda are the SAME PRICE as what you would pay for something in the US (plus there are no “store brands” or couponing, and very few sales). The Walusimbi household currently has a budget of approximately $125 to spend on groceries, toiletries, cleaning and laundry supplies, Pullups, and any medicines, for the month. 20% of my monthly budget was now lying shattered on the floor.

Now that you’re with me, understanding my defeat, let me tell you what $22 means to the majority of Ugandans. Remember that I mentioned we are in the top 20% income bracket for the country? If we, the Walusimbis, struggle at times to pay for things that are needed, how do people in the lower 80% of the economy make ends meet on a daily basis?

This is constant struggle for families in Uganda, the majority of whom don’t have a steady income and survive on less than $2 per day, which means less than $60 per month. This means they often don’t have enough for the very basics in life such as food and shelter, let alone being able to save enough for emergencies like medical expenses. This is one of the main reasons families are either unable to send their children to school, or that children are unable to finish school. Of course, being unable to educate just perpetuates this cycle of poverty. Many families understand this, and try to make education a priority, but the odds are stacked against them.

The next morning was Monday. As I was driving - not walking - the next day around 10 am to the pharmacy to get more antibiotics (with money from the emergency fund), I passed so many school age children who were fetching water, gathering firewood, digging in the garden; all doing tasks to help their families, but not attending school. I’m sure some of them were afflicted with the same horrible cold that my kids have, and they kept their mamas awake too. I started to cry, again, right there in the car, about money, but this time it wasn’t about the blown Walusimbi budget. It was for all the families who want so much for their children but just can’t make it work.

I’m sure you can relate to at least a part of my story, whether it’s a terrible sickness, obnoxious toddlers, or blowing the family budget with a stupid mistake you could not afford to make. I hope you found your way out, and I pray for all of you who are still struggling. If you think you’d like to make a contribution that could help break the cycle of poverty for a family, consider making a contribution on our donation page. It may be a small sacrifice for you and your family, but it could change the life of a student forever.